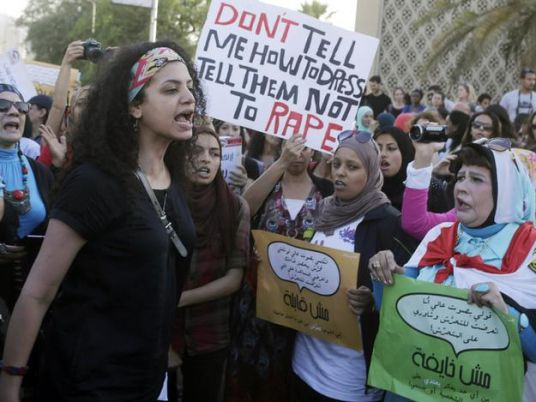 Promundo, a Brazilian organization that campaigns for gender equality, recently released a study examining sexual harassment and gender inequality from men’s point of view. By interviewing people in Egypt, Lebanon, Morocco and Palestine, they tried to figure out the reasons why men like to cat-call and yell out insults at women passing by.

In collaboration with UN Women, researchers surveyed about 10,000 people – men and women – and published a report with their findings.

Between 31 percent and 64 percent of the men interviewed admitted to harassing women on the street in Egypt, ranging from ogling to stalking and rape; and 40 to 60 percent of surveyed women said they had experienced it.

When asked why they did so, the vast majority of men – up to 90 percent – said they did it for fun, with most blaming the women for dressing “provocatively”.

Researchers Gary Barker and Shereen El-Feki  believed that he high incidences of sexual harassment had to do with the lack of power that men had in these countries, amidst high unemployment rates, political instability and pressure to provide for their families.

About half the men surveyed said they felt stressed, depressed or ashamed to face their families because they couldn’t adequately provide for them; and Barker said that street-based harassment was a way for them to assert their power.

In the same article, El-Feki suggests that it’s a way for men to “get their kicks”, in a world where men can’t find work, can’t marry, and live with their parents in a “suspended state of adolescence”.

These young men “have high aspirations for themselves and aren’t able to meet them,” he says. “So they [harass women] to put them in their place. They feel like the world owes them.”

The researchers were surprised by the findings. Generally, men who have finished high school or college hold more enlightened attitudes toward women than those who have had no primary school or schooling at all, says Barker, who has studied men and gender equality.

The researchers at Promundo suspect that men’s motivations behind the behavior are not unique to the Middle East. “We know that street harassment is an issue around the world, and there are likely similar dynamics at play,” says Brian Heilman, a fellow at Promundo who helped write the report.

“We just happen to have a rich glimpse of what it looks like in the region through this data set.”

This report is the first time that the group has studied street harassment from the male point of view in-depth.

Women can experience a wide range of psychological effects from street harassment, the report said. Studies highlight that for women who are survivors of sexual violence, harassment can be triggering and traumatic. It also can make women feel unsafe and as a result, they restrict their movement.