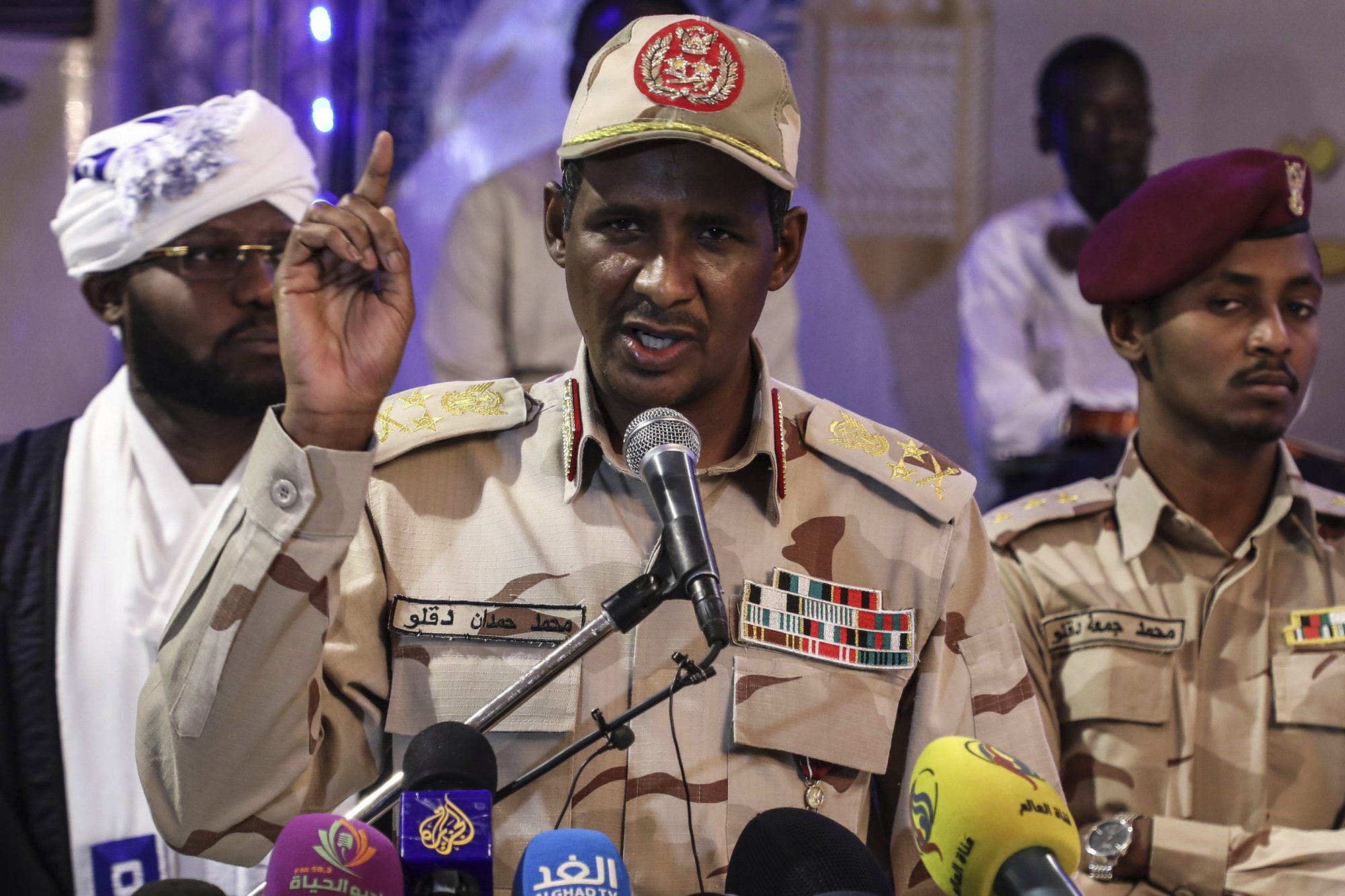 CAIRO (AP) — In April 2015, President Omar al-Bashir traveled to the heart of Sudan’s conflict-ravaged Darfur region to congratulate one of his hand-picked commanders on a recent victory over rebels.

Gen. Mohammed Hamdan Dagalo, better known as Hemedti, had led the so-called Rapid Support Forces on a series of counterinsurgency campaigns in Darfur and other restive provinces. The paramilitary force grew out of the notorious Janjaweed militias, and rights groups say forces under his command used many of the militias’ brutal tactics.

“I signed the list of promotions that I received from you without even looking at it,” al-Bashir told a cheering crowd, addressing Dagalo, as he stood atop a Land Cruiser in the sweltering heat, according to a contemporary account of the rally.

Four years later, al-Bashir is imprisoned in the capital, Khartoum, and Hemedti, who comes from a camel-trading family in a remote province, is the second most powerful man in Sudan.

He is the deputy head of the military council that assumed power after removing al-Bashir from office in April, following four months of mass protests. At 44, he is also the youngest member of the council. He says he refused orders from al-Bashir to fire on the protesters, and he praised them as recently as last weekend, saying “we want the democracy they are talking about.”

Many see him as an ally against the Islamic movement that orchestrated al-Bashir’s 1989 coup and underpinned his regime. Hemedti has supplied ground forces to the Saudi-led coalition fighting Iran-aligned rebels in Yemen and can count on the support of the Saudis, the United Arab Emirates and Egypt, which also hope to sideline the Islamists.

But his meteoric rise is closely linked to the ongoing conflict in his native Darfur, where his forces are accused of continuing the scorched-earth campaign against rebels that al-Bashir launched in 2003, and for which the president was indicted for war crimes and genocide by the International Criminal Court.

Hemedti, who declined AP requests for an interview, has not been implicated in the atrocities carried out in Darfur in 2003 and 2004, when the government-backed Janjaweed rampaged across the region, torching villages and killing and raping ethnic Africans. Some 300,000 people were killed and 2.7 million were forcibly displaced in the early years of the conflict, before the violence gradually declined.

In an interview with documentary filmmakers in 2008, Hemedti said al-Bashir had personally asked him to lead the campaign against the insurgency in Darfur, but he denied any involvement in attacks on civilians and said he had refused orders to attack civilian areas.

Magdi el-Gizouli, a scholar at the Rift Valley Institute, a think tank focused on East Africa, links Hemedti’s rise to the military’s outsourcing of the conflict to local forces.

“In essence, he is the reason why the rebellion in Darfur was defeated, because he was capable of recruiting an efficient fighting force that knew the local terrain well, that knew the geography well, and that had an ax to grind against farming communities in Darfur,” he said.

The RSF, formed in 2013 and eventually including up to 10,000 fighters, was in some ways an attempt to bring greater discipline to the Arab militias and more closely tie them to the armed forces. Under Hemedti’s command, the RSF waged two major counterinsurgency campaigns in Darfur, in 2014 and 2015.

A 2015 report by the New York-based Human Rights Watch found that the RSF “committed a wide range of horrific abuses,” including forcibly displacing entire communities, destroying wells and plundering livestock. “Among the most egregious abuses against civilians were torture, extrajudicial killings and mass rapes,” it said.

Witnesses to a 2015 attack by the RSF in Darfur’s Jebel Marra region said troops carried out mass rape in and around the village of Golo, often gang-raping women and girls in front of local elders before killing the women and leaving their bodies in the streets, Human Rights Watch said.

“As head of the RSF, Hemedti bears responsibility for the attacks on civilians his forces have carried out, in which civilians have been killed and villages have been burned to the ground,” Jehanne Henry, a Sudan researcher at Human Rights Watch, said last week. “The fact that Hemedti is now deputy head of the (transitional military council) is not lost on Darfuris I speak to.”

The International Criminal Court has not brought charges against Hemedti. But it said in a 2014 report that the RSF under his command was “similar in structure and modus operandi” to the Janjaweed, with a “similar pattern of indiscriminate and disproportionate attacks against civilians.”

Hemedti’s forces appear to have acquitted themselves better during the protests against his longtime patron al-Bashir, which erupted in December over rising bread prices and rapidly escalated into a popular uprising. He says his forces, like the regular army, refused al-Bashir’s orders to violently disperse a sit-in outside the military headquarters in Khartoum established on April 6. The military removed al-Bashir from power five days later, ending a 30-year reign marked by repression and civil war.

The protesters have remained in the streets , demanding that the military rapidly hand power over to a civilian government. But while the protesters have forced several officers to resign from the council after complaining they were too close to the former regime, there have not been widespread calls for Hemedti to step down.

“Many people, including some of Sudan’s finest democrats, consider him a counterweight to the Islamic movement,” el-Gizouli said. “A lot of people in Khartoum would be ready to tolerate him for a while. I’m not sure what they can do once this ends.”

In the weeks since al-Bashir’s overthrow, Hemedti has met with Western ambassadors and other envoys in his office in the presidential residence. He has said he has no interest in seeking higher office and has called for a government of technocrats.

“We want a real democracy, fair and free elections,” he said Saturday. “Whoever the Sudanese choose will rule.”

But he has also warned the protesters against any further “chaos,” hinting late last month that the military may use force if the unrest continues. In Darfur, government forces violently dispersed a rally earlier this month outside a military facility, setting off clashes in which an 18-year-old protester was killed.

The protesters in Khartoum have meanwhile expressed mounting frustration with the military council, accusing it of dragging its feet in order to keep much of al-Bashir’s regime intact. As tensions escalate, Hemedti’s balancing act could prove more challenging.

“Hemedti has been thinking that he is one of the leaders of the change because he was neutral in the protests,” said Shamayel el-Nour, an activist with the Sudanese Professionals Association, which spearheaded the demonstrations. “The protesters recognize his refusal to use force against them, but in Darfur he is viewed as a war criminal.”

Photo: In this Saturday, May 18, 2019 photo, Gen. Mohammed Hamdan Dagalo, better known as Hemedti, the deputy head of the military council that assumed power in Sudan after the overthrow of President Omar al-Bashir, speaks to journalists in Khartoum, Sudan. At 44, he is the youngest member of the council. He says he refused orders from al-Bashir to fire on the protesters, and he praised them as recently as last weekend. (AP Photo)